The first job site I went to was a long ride in the semi truck to a place called Chama.  We traveled over a lot of roads through NM and we brought tractors and materials and acouple of my friends, the guys who work for Advance Concept Construction.  Driving the semi was my buddy Kurt, General Manager.  I even made a friend, he lives with the owner of the project. 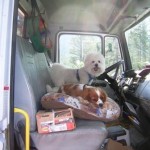 The first thing they did was clear a place for the barn they were going to build.  They took real good care not to clear too much land, just enough for the horses. . I got to see why those tractors are so special.  With there ability to turn their wheels, they are not like normal skid loaders that skid around and tear up the ground, which is very important in the mountains where we were. I was a little scared of all the equipment but Kurt put me in the tractor with him, behind the safety bar.  Wow, this was fun! And I felt so secure with Kurt.  He really watched out for me and all the guys there. 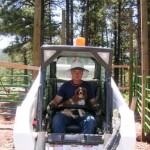 We had a giant rock to move, it was bigger than the whole tractor.  Now that took skill to move that one. 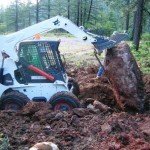 Next they dug some deep holeswith the auger attachment and set poles in them with the tele-boom and then trucked the concrete in from the road in a mixer bucket which let them put it right where they wanted it with no spilling.  Now I see what all those attachments were for, digging holes and pumping concrete.  They really brought everything with them. 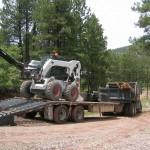 Next came putting on the roof.  That was a long way up.  I didn’t want anything to happen to my friends and it looked scary.  Then I watched them put on harnesses before they climbed up on the roof so they would be safe.  Kurt really does watch out for everyone.  They wore hard hats and big heavy steel toed boots too. 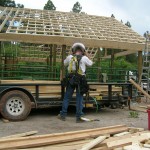 In just 5 days, the barn was done and they never had to leave to get any more material or supplies.  They did such a good job, it looked great, the owners were so happy.  And best of all they took care of each other by being really safe, and they took good care of me!  2 years ago when the fire station in Chama caved in from the snow, that barn is still standing.  I am glad that Advance Concept goes to all the trouble to make sure that projects are correctly engineered to protect everybody. 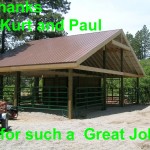