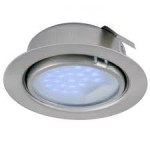 Unless you’re entirely cut off from civilization, you’ve probably heard by now of the LED craze.   More than a fad, LEDs seem to be the next big step towards energy efficient lighting.  According to the U.S. Department of Energy, the adoption of LED lighting in the U.S. over the next 20 years can:

These statements should not be taken lightly, no pun intended. So what exactly are LEDs and how do they work?

LEDs (light-emitting diodes) are light sources illuminated by the movement of electrons through a semi conductor. You may not know it, but you’re probably exposed to LEDs on a daily basis: the indicator light on the on/off button on your computer and the light that shines on the exit sign in your office building are most likely powered by LEDs.  But new high powered LEDs have been developed that can provide white light for large areas. These LEDs are much more efficient lighting sources than incandescents or even compact fluorescents. For one, they produce more light using less wattage, so it costs less to run them. They also give off very little heat, where as 90% and 80% of energy emitted by incandescents and compact fluorescents, respectively, is heat. LEDs also have a longer useful life; they last 3-5 times longer than compact fluorescents and up to 50 times longer than incandescents. When they do fail, it’s a gradual process unlike other light sources that burn out abruptly.  Other advantages include faster switching, smaller size, better shock resistance, and easy dimming, to name a few.

The question then is, if LEDs are so great, why haven’t they entirely replaced all other lighting sources?  The truth is LED’s are great, and they are expected to revolutionize lighting as we know it in the coming years. But experts are still working out some kinks and there certainly are some common disadvantages associated with LEDs.  Among other things, there’s a higher initial cost as compared to other conventional lights, and LED bulbs are not as readily available as other sources.  This is in part due to the fact that it’s a newer system and there are still just a few LED manufacturers out there. Another somewhat unappealing factor is that the color of the light produced by LEDs is cooler than incandescents or natural sunlight, so objects appear differently.  In other words, that nice warm glow we all connect with coziness and comfort is not quite achievable with this lighting source. Yet.  In time, who knows what will be developed!

Are LEDs perfect? No. But they certainly come close. And if you’re in the market for replacing your existing fixtures, or if you’re interested in using high efficiency lighting sources in your new construction- it’s well worth your time to learn more about LEDs.   Advance Concept Construction’s electricians can show you your options and the difference LED’s can make and we’ll show you the cost and the energy savings!