Lincoln, the Advance Concept mascot, here with an interesting story about foundations.  My buddies at Advance Concept Construction are building a house in the hills of Northern New Mexico.  Like most of the areas we visit, there are lots of rocks, but these are really big rocks and some of them are really soft.  The other problem is that there is a lot of clay, (I guess that if why my feet got all dirty).  The clay soil is also a problem because it wasn’t stable enough for the house , clay soils can expand and contract depending on how much moisture content they have.  Because of the soft sands, clay, and the rocks the house could settle on one side and heave on the other .  Kurt, the general manager at Advance Concept, always doing the right thing and never taking dangerous short cuts,  had already called his friends at the geo tech service and the engineer and had testing done.

It was decided to do caisson footings.  So out comes the big augers and they dig 20 foot deep holes. 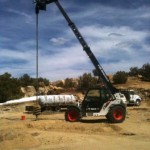 This picture shows the auger, all 20 feet of it and then a couple of more feet.

They drill different size holes depending on the building loads.  The biggest holes was 24” around 20’ deep.  It took a while to dig that one.  And it made a big pile of dirt.  Then they had to go through some that had layers of sandstone, they have special auger with rock teeth that just grinds right through the rock.

Next will go in the rebar. It’s like building a skyscraper except it goes down in the ground!  All the rebar has to be tied together and the state inspector has to pass it before we can pour concrete. 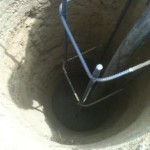 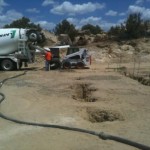 Great, now we’ve passed and the cement trucks arrive to pour the cement.

All my guys wear hard hats and steel toed shoes  – safety is always number one!  Down goes the concrete. The crew is very careful as they place the concrete pump hose all the way to the bottom.  I hear Kurt telling one of the new guys that the concrete cannot free fall as it will separate from the sand and the aggregate and will not set right.

I also see Kurt making sure that all the things have been added to the cement for each truck that shows up.  They talk about water hydration stabilizer that has been added because the job is so far from the concrete batch plant to keep the concrete from setting while they are driving and then instead of adding water they add super plasticizer to make it flow better but that it does not lose it strength like if they added just more water.  Wow there is a lot that goes into this concrete.  I guess it is important as this whole house is being supported by just 39 piers.

All this work  may have put a delay in the project but now that house will not shift or crack when the soils settle of swell.  I learned today that having the right foundation is very important.

See you again real soon.  On my way now to go look at a building with Kurt.  I heard that it has cracks and is moving because somebody took a short cut on the foundation. 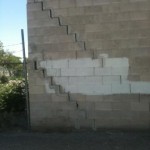